Right Timing: Why It Pays to Wait 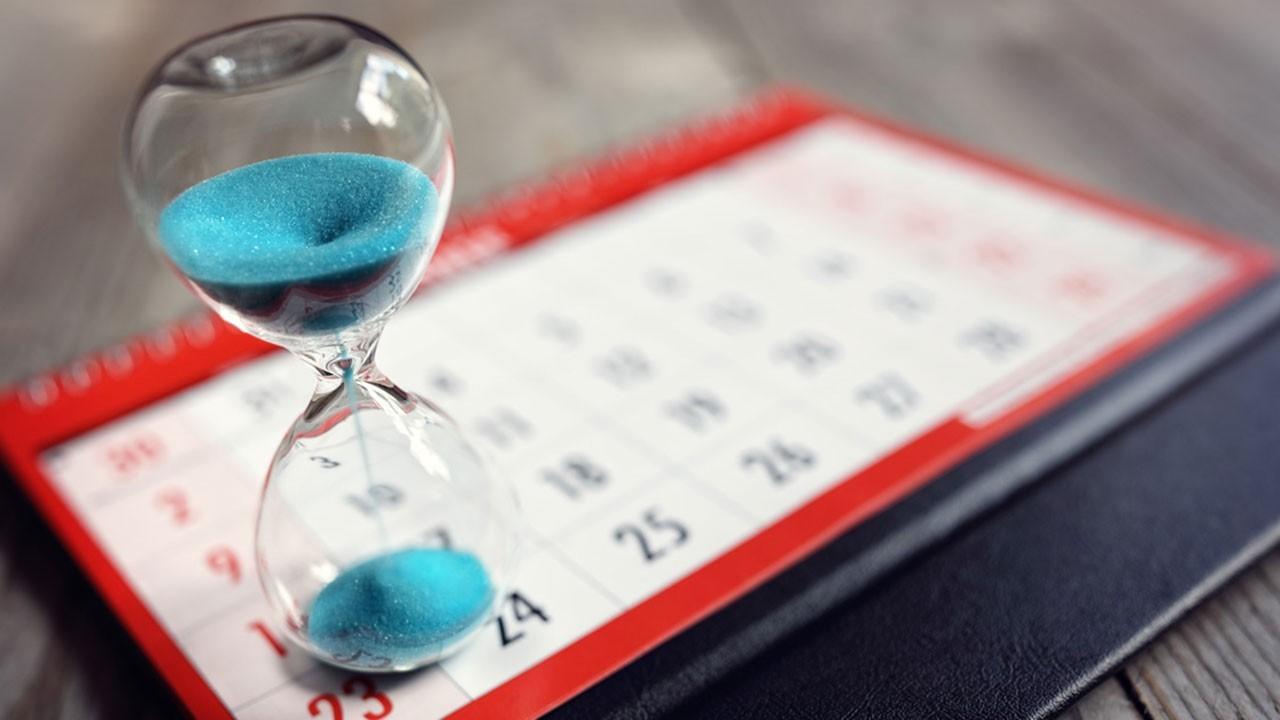 That’s why we have instant coffee, quick dry nail polish, and Amazon Prime. We have industrialized an entire culture around the premise that waiting is an unnecessary waste of time, and that quicker gratification of our impulses and desires is the whole point of technology. There is a tacit assumption imbedded within this premise, however: that time is a commodity that, itself, can be shrunken and truncated without consequence.

Is that really true?

Well, through the lens of the orthodox thinking, life is a series of random events – good and bad – that just happen. The more good, the more happy. The more bad, the more sad. We use science and technology to architect our lives so that all of the details match up to exactly what we want – only then is it possible to feel contentment and to quiet the chaos in the mind. So, the quicker the good stuff comes, the better!

And it certainly reflects the way that many of us relate to our struggles and desires. Myself included. In fact, if impatience were a vice, I’d have needed repeated stints in rehab to address my issue. This quality served my patients well in the development of my protocol – a one month, no nonsense, let’s fix this nowkind of approach. The nuance emerged, however, as I began to witness that the real work – the deeper shift in beliefs and mindset – only began after this foundation of self care was firmly established.

It was through my work with hundreds of medication tapers, that I began to observe the idiosyncrasies in the process. Some patients could taper from 100mg of Zoloft in a year, and some took 6 Years.

Some developed disabling physical symptoms of withdrawal, others were brought to their knees by psychospiritual and existential crises. I stopped making any clinical indications around “how long”, but knowing the calming power of visualizing the finish line, I always assure patients that “it will end”…but with one important caveat…“it will end when it’s time to shift into the next phase of your life.”

Right Timing: How it happens when it needs to

This is called Right Timing. The concept itself is predicated on a very different premise – the premise that there is an unfoldment that we are a part of. This unfoldment is meaningful, purposeful, and complex beyond all imagining. So much so, that we have to trust beyond our own ability to capture the design with our minds.

Lydia had been diagnosed with OCD. She was germ-phobic and, specifically, STD-phobic, going to great lengths to engage in sex while being “safe.” Her taper off of Prozac was uneventful after she had experienced significant resolution of her hormonal instability (she had also been diagnosed with PCOS) through our initial healing month. Then, mid-taper, she had a radical, nearly overnight shift in her symptoms that resulted from what could only be called a religious awakening. Lydia realized that she had not been honoring her felt religious beliefs as a Catholic, committed to hold off on sex until marriage, and all of her residual obsessive symptoms disappeared. Overnight.

I assumed that her final 5mg would now be a breeze to taper, but I was wrong. We encountered significant challenges (vertigo, dizziness) decreasing by even 0.25mg, and I began to see that more had to shift before she could be medication-free and enter into a life where she was no longer afraid of her body, of symptoms, or of her felt emotions.

She began dating a man who held a different set of religious beliefs. He believed that the body was simply flesh and insignificant relative to the spirit. He questioned her detox practices and diet, but agreed with her newfound views on the risks of medications. She descended deeper into a world of confusion as the relationship progressed.

Finally, she experienced the death of several friends in the space of a short window of time, and she broke down, anxious, overwhelmed, tearful…something was happening.

What I saw as happening was the extinguishing of any old constructs of self so that her new self could be born. A self that had clarity around her beliefs, her truth, and her relationship to her own energy and boundaries that supported this. I encouraged her to simply allow herself to be confused, and to double down on self care during this time of crisis.

Only then was she ready to complete the taper.

This is how a process that should be as simple as taking less medication is serving as an initiation to self for so many today. And it does so with a timing that makes sense for your process, your level of consciousness, and your readiness.

Living the questions while you wait for answers

Rilke called this process of preparing for what we think we want, “living the questions.” “Don’t search for the answers,” he says, “which could not be given to you now, because you would not be able to live them.”

…I would like to beg you dear Sir, as well as I can, to have patience with everything unresolved in your heart and to try to love the questions themselves as if they were locked rooms or books written in a very foreign language. Don’t search for the answers, which could not be given to you now, because you would not be able to live them. And the point is to live everything. Live the questions now. Perhaps then, someday far in the future, you will gradually, without even noticing it, live your way into the answer. -Rainer Maria Rilke, 1903

And so it is with personal transformation – it doesn’t happen on your timeline. It doesn’t happen on mine. It happens in a way that is so perfectly orchestrated that when you look back on your process, you can only feel an inner sense of ‘wow – look at everything that needed to happen to truly ripen me for this picking.’ It has been these retrospectives that have made me a believer in Right Timing. These experiences, and also a deep appreciation of what I call the Maybe Principle.

Take a moment to enjoy my favorite philosopher’s rendering of a Chinese parable which illustrates the concept – what comes is neither good nor bad…it is not always what it seems…and it yields only a flow of happenings that generate a human experience.

So, if what we think we want most may only thrust us in the deep end of a pool we don’t know how to swim in, and if what we long to get rid of needs time to leave, then how do we navigate the process of transformation? 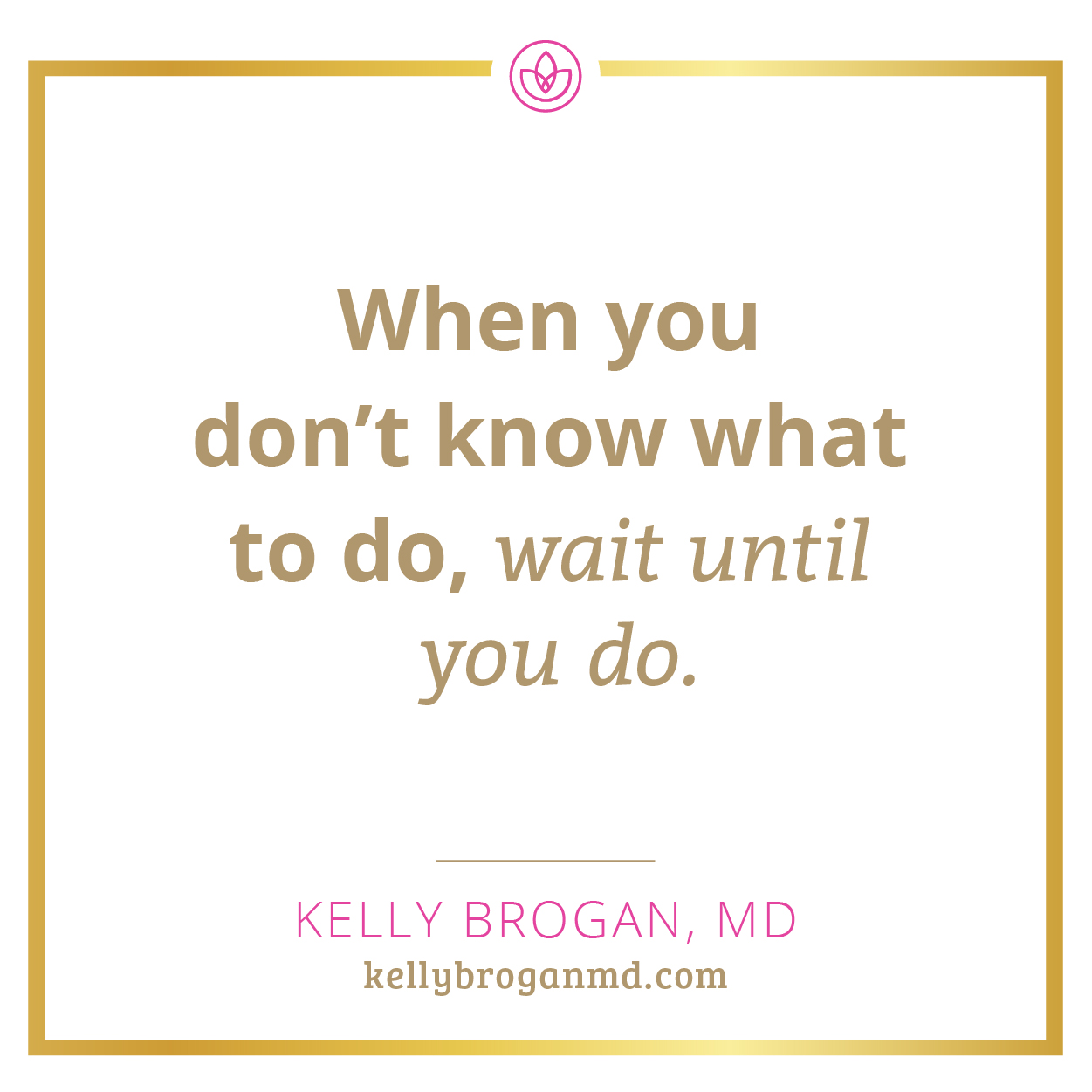 I have a simple piece of advice for you that I will hand down from my teacher, Swaranpal, who told me as I fretted about a move that I felt needed to happen at a time when the universe was clearly telling me to stay put. She said, and I’ll say to you:

When you don’t know what to do, wait until you do.

As the women that I work with awaken from their slumber – whether medication-induced or not – they look around and naturally feel the need to shed skins. They chose their marital partner, their friends, their house, and their job all while they were sleepwalking through life, unembodied and disempowered. It can feel like an emergency to get a divorce, to move, and to quit that corporate job. And it may very well be the case, that all of those things need to happen in order for you to feel authentically you.

But all you have to do is focus on your self-care. 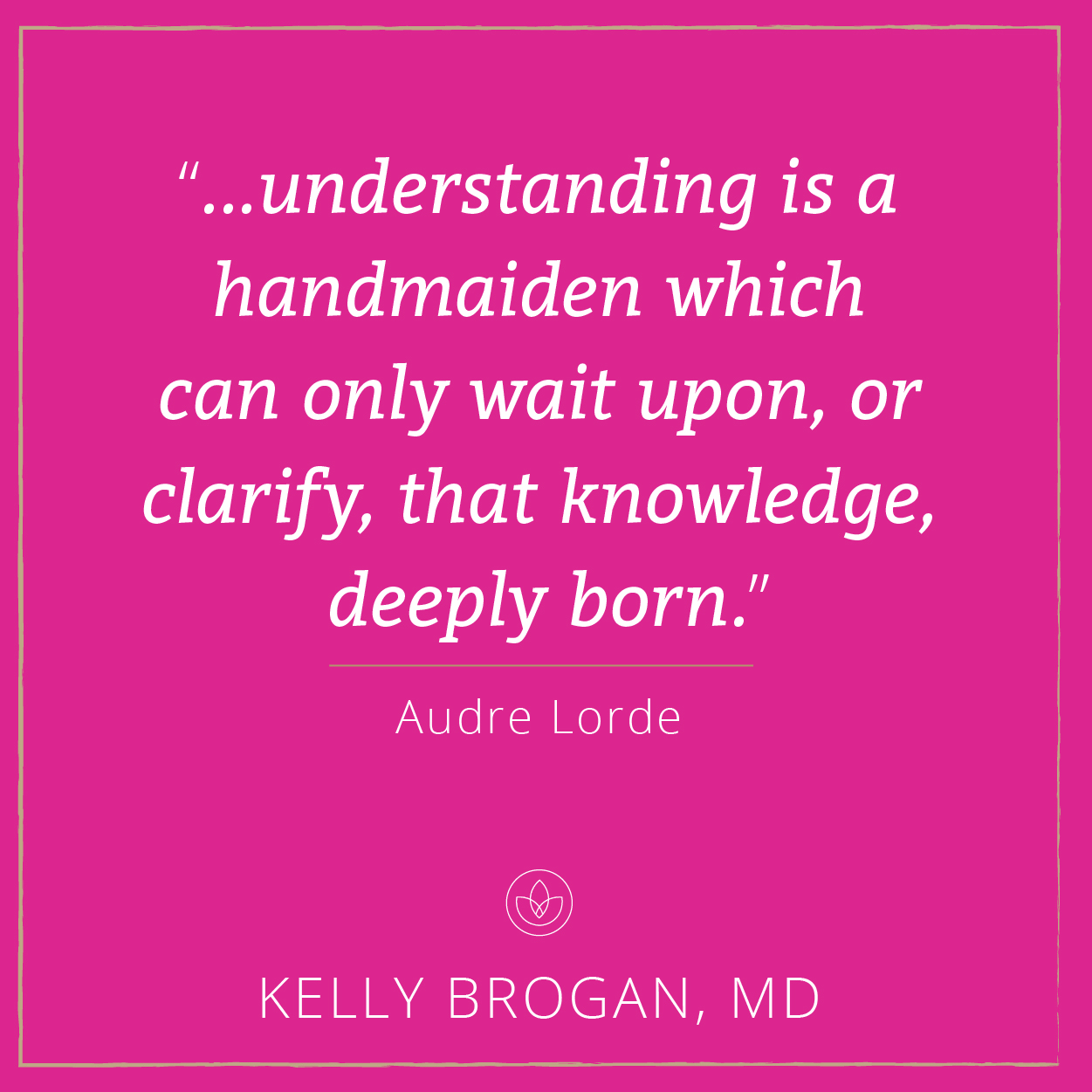 Commit every single day, and don’t cheat this devotional practice. When you’re clear – when you feel comfortable in your own skin, when your mind serves you rather than the other way around, when you feel in control of your schedule because it is built around your personal care commitment – you will be sensitive enough to the knowing that will arise, to the answers that will materialize, to the signs and the indications that it is time to act.

And until that happens, you simply trust that it will.