Steps to a Healthy Microbiome 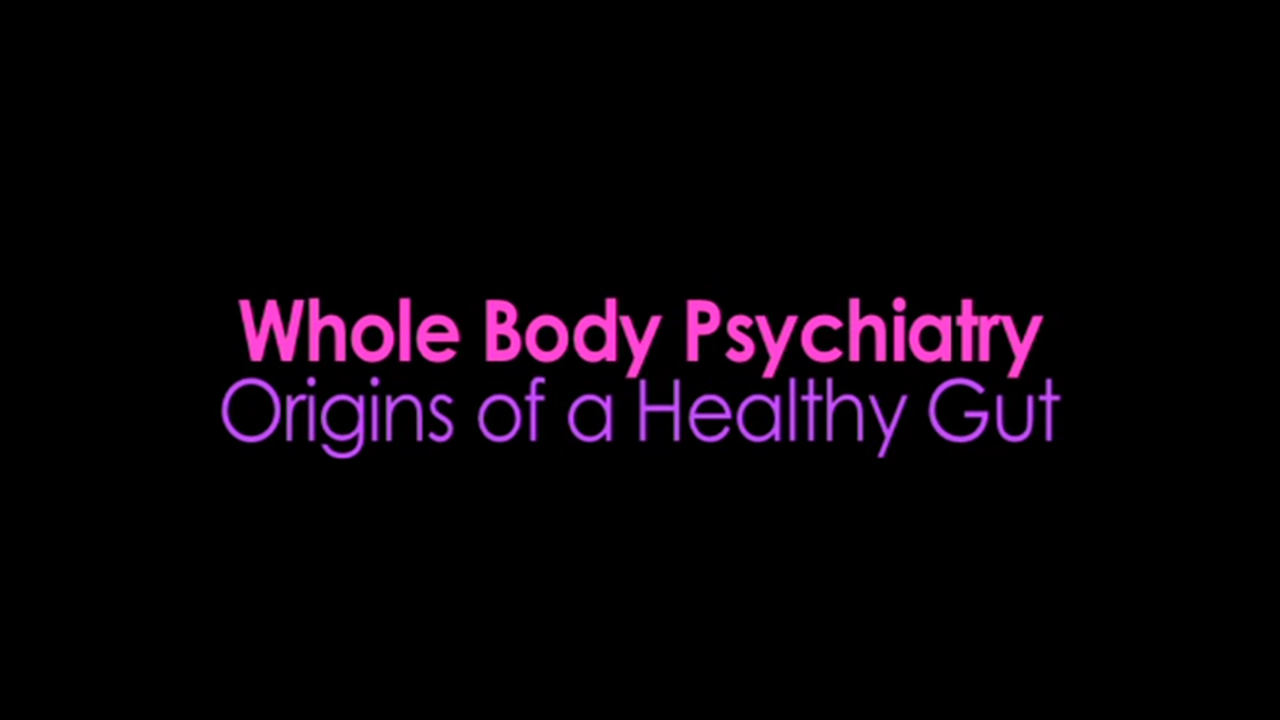 My patients are often surprised when I ask them where they were born and whether or not hospital walls and their mother’s vaginal canal were key players in their emergence. As someone who follows a burgeoning literature on the role of the microbiome in regulation of immunity, inflammatory response, and brain health, the formative role of the birth experience in later mental health is one I choose to shine my investigative light on.

Mental health and wellness are often, if not always, a reflection of bodily and physiologic balance – endocrine, gut, immune, neurochemical. Through this lens, allergic and autoimmune disorders, metabolic derailments, and cancer are all relevant indicators of the nature of this multifocal imbalance and the pathway to repair.

Pathologies such as obsessive-compulsive disorder can be seen as an inflammatory/immune/microbiome-based problem with a non-medication resolution (far from the hand-waving attribution of these symptoms to a “serotonin imbalance”). Increasing evidence supports the primary role of the gut microbiome in influencing stress-response patterns, most notably cortisol production and regulation.1

When, with the completion of the Human Genome Project, we learned that we must have outsourced the vast majority of our human physiology to somewhere other than our 25,000 genes, we began to focus on epigenetics. This is the body’s ability to manifest variable genetic expression within our epigenome without changes to the primary nucleotide sequences of our DNA itself, and this mechanism relies primarily on environmental cues, sometimes referred to as the exposome.

In short, the gut is arguably home base for health.

How do our guts get set up? What are the contributing factors to gut health? When does it start?

Adding to a long list of “oops!” in the history of medicine, it was long-held that the womb was a sterile environment. We now have broadened our appreciation of the ubiquitous nature of microbes to encompass their special place in the placenta, umbilical cord, and fetal membranes. In this way, the pregnant, mother-to-be’s long life of antibiotics, birth control, gluten, GMOs, chronic stress, and vaccination all conspire to set the stage for the antepartum, intrapartum, and postpartum passage of microbial information for gene expression.

This supports the vital importance of a detoxified pregnancy and a nutrient dense diet. I look to the tenets of Weston Price, and borrow from the principles of ancestral health which acknowledges the role of nutrient dense animal foods for fatty acid support, fat soluble vitamins, choline, b vitamins, and zinc. I recommend strict avoidance of gluten, sugar, pesticides, and genetically modified foods such as virtually all corn, soy, and vegetable oils on the market today.

I am no longer interested in defending the “safety” of homebirth. Well-conducted meta-nalyses have done this, such as those published in 2005 and 2013 in the British Medical Journal which found that those who gave birth at home had lower (by more than half) rates of severe, acute maternal morbidity, postpartum hemorrhage, and manual placenta removal. These statistics, and the fear-mongering rhetoric around birth are speaking around the primary issue: birth is not a medical problem to be managed. Women have allowed this most primal and transformative experience to be coopted by a male-dominated paradigm of abusive interventionism. In no way, should the burden of proof lie in defending how we have birthed for the entirety of our presence here on this planet. Birth is not about monitoring strips, pain, and apgar scores. It is an evolutionarily orchestrated dance in a woman’s mind and body that gives way to a mother-baby dyad, a unit, that must be preserved, protected, and honored.

Is it possible that 1/3rd of American women, now having surgical births, have lost the ability to birth as we evolved to do? According to Dr. Stuart Fischbein, homebirthing obstetrician, in one generation, we have gone from birthing 99% of babies at home in 1920 to 99% of babies born in the hospital by 1950, and a C-section rate that has increased by 50% since 1996 with no improvement in neonatal mortality.

A fascinating study entitled Cesarean delivery and hematopoietic stem cell epigenetics in the newborn infant: implications for future health? identified significant epigenetic changes induced by vaginal birth, that were apparent as global methylation differences and even specific DNA loci that seemed to correlate with labor duration and vaginal birth. This means that vaginal birth influences gene expression in enduring cell lines in newborns – it’s an important part of the process!

Beyond the unintended side effects of pain interventions, the interference with breastfeeding onset and potential risk for postpartum depression, a medicalized birth also disturbs and jeopardizes the health of the microbiome. We know that babies born surgically are more likely to have gut colonization from non-mother skin flora than mother’s gut,2, 3 but what about babies born vaginally in a hospital vs. at home?

A 2011 study in the Journal of Allergy and Clinical Immunology, researchers attempted to answer this question. In a birth cohort, fecal samples were collected at 1 month of age, and blood samples at ages 1 and 6-7. The authors conclude:

In this analysis, they corroborated the “non-maternal skin bacteria” inheritance of the infants born surgically, and found that they were colonized by less beneficial bacteria such as bifidobacterium and bacteroides. They attribute differences in health outcomes in these children to the presence of a pathogenic species – Clostridium difficile. It is possible that there was an unappreciated influence from other related factors, what is referred to as healthy user bias, wherein those women birthing at home were more likely to engage in conscious health decisions, generally. In this cohort, 491 of the recruited were in the “alternative lifestyle” group noted for “child-rearing practices, dietary habits, restricted use of medication, and vaccination schemes, but we do know that there are fundamental differences in microbial colonization depending on place of delivery.”

A recent article also attempted to explain what we are doing wrong in the hospital, from a microbial perspective. With 99,000 deaths annually attributed to hospital acquired infection, all of the Purelling, efforts towards sterility, and employee protocols may be enabling these deadly pathogens to take hold. This is a prime example of how we need to look beyond the one-germ-exposure-equals-infection meme that has driven a multi-billion dollar vaccination program, reckless use of antibiotics, and personal disinfectants. According to Environmental Health Perspectives:

“A new hypothesis says that hospital-acquired infections are being driven not by the existence of harmful microbes but by the absence of helpful species.”

It certainly appears that we may be setting the stage for lifelong obesity, asthma, allergy, and mental illness by neglecting the role of hospital-based microbial life and interference with maternal transfer of bacteria, in the birthing of our babies.

One of the specific perils of a medicalized pregnancy is the routine screening for a specific pathogen at 35-37 weeks – Group B Strep. Part of the commensal vaginal microbiome for a large majority of women, the belief has been cultivated that it’s presence is significant cause for harm. Because of the inability to predetermine what babies might be vulnerable to this infection when exposed, 68966 women would be treated to prevent 1 neonatal death – if, indeed, that’s what antibiotics are capable of doing. According to the gold standard in objective evaluation of available research, the Cochrane Database:

“This review finds that giving antibiotics is not supported by conclusive evidence. The review identified four trials involving 852 GBS positive women. Very few of the women in labor who are GBS positive give birth to babies who are infected with GBS and antibiotics can have harmful effects such as severe maternal allergic reactions, increase in drug-resistant organisms and exposure of newborn infants to resistant bacteria, and postnatal maternal and neonatal yeast infections.”

Additionally, a retrospective study in Pediatrics found that all of the infants with GBS infection, were, in fact, administered intrapartum antibiotics. Of potentially greater concern is the increased risk of late-onset serious and drug-resistant bacterial infection conferred by intrapartum antibiotic exposure4 and the 40% increase in neonatal mortality (despite 68% decrease in GBS colonization) when infants are given antibiotic prophylaxis postpartum.5

Notably, if we are to regard GBS as a stand-alone risk factor, garlic and probiotics may be all that’s needed to safely shift vaginal colonization.6, 7, 8

Perhaps universal screening without appreciation for other contributing risk factors for neonatal GBS infection, and mandatory IV antibiotics which are not only ineffective, but threatening to a cultivated commensal microbiome, does not represent best practice. Then again, most obstetricians don’t tend to concern themselves with evidence based medicine, let alone, supporting physiologic birth.

We’ve explored two parts of this tripartite microbial inheritance and the final means of educating a newborn’s immune system, inflammatory and cortisol response is breastfeeding. Breastmilk is so much more than “food”. It is emblematic of food as information, as more than the sum of its caloric or micro/macronutrient parts. It contains immune factors, bacteria (termed entero-mammary transfer), and over 200 unique oligosaccharides, designed to nourish gut bacteria, which are not replicable and conspicuously absent from each and every formula on the market. Recently, epigenetic modifiers as packets of immune-related information or exosomes have been discovered in breastmilk, further revealing the hubris involved in assuming that we have decoded the elements of infant immunity and nutrition evolved over millions of years.

Infants are born with an anti-inflammatory phenotype, designed to rely on maternal immunity for temporary genomic education and expression. Vaccine-induced antibody production and associated immune-stimulating toxic adjuvants have no place in this relationship, and are, in no way, a surrogate. Studies demonstrate that vaccine-induced antibodies are present in 49% of babies born to naturally immune mothers and 15% in vaccinated at 8 months.9, 10 Modern conceptualization of immunity and psychoneuroendocrinology have rendered archaic the simplified antibody-based paradigm of vaccinology.

We have come a long way from our roots as evidenced by studies examining the vastly different gut microbiomes of modern day hunter-gatherers and urban dwelling Italians. Given the now acknowledged estimate that 90% of our cells are bacterial in origin, it could be argued that we have forcibly evolved our species out of its natural manifestation – one defined by a coevolution within an ecosystem. Now, our very humanity, as largely defined by the microbial communities in and on us, has been permuted by exposures to medical interventions, pharmaceuticals, genetic modification, industrialization, poisoning of our food supply, and chronic stress. Healing from these transgressions will require that we start to recognize the sanctity of pregnancy, birth, and postpartum in establishing the bedrock for future mental and physical health of each child, and our children’s children.