Your Microbiome On Drugs 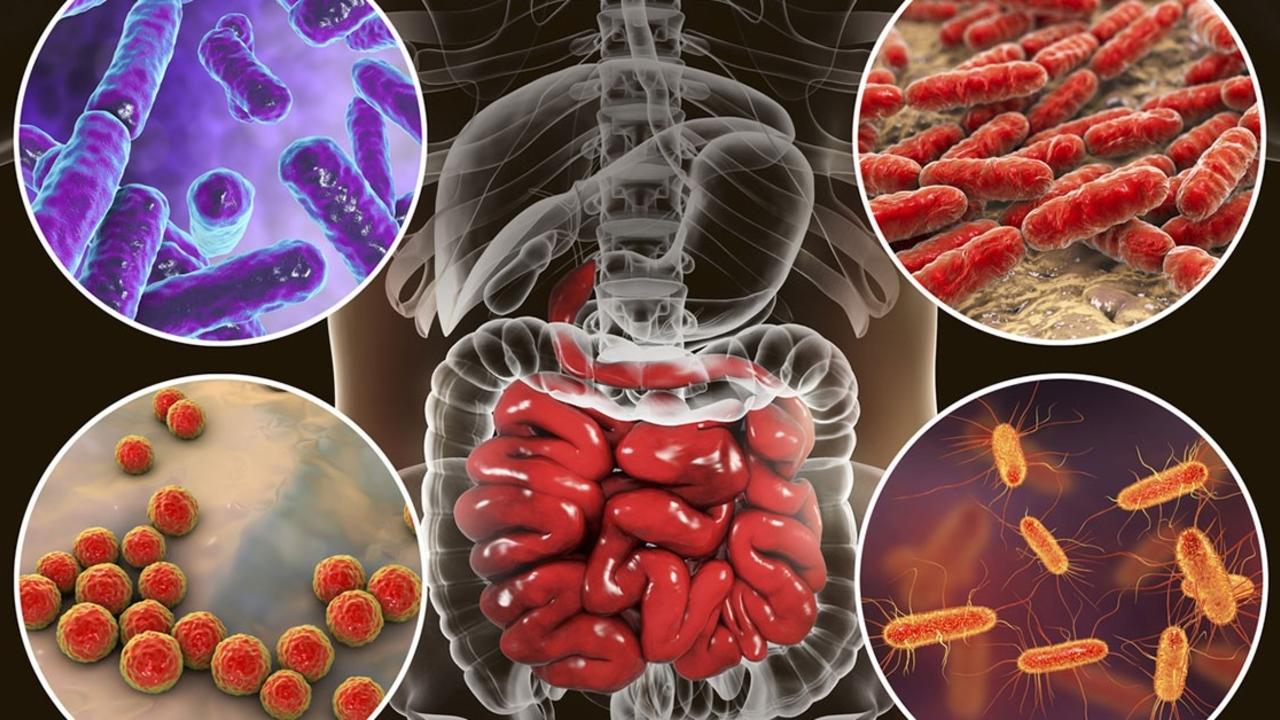 For those of you who have ever had a garden, you know the struggle. It requires hours of back-breaking work to pull out the weeds and to care for the new plants. However, once these new plants get firmly established in the soil, they naturally keep the weeds at bay. Maintaining this balance is key to a successful garden. In many ways, the human microbiome is similar. Healthy bacteria that are firmly established in the gut naturally inhibit the growth of potentially pathogenic bacteria and yeast.

Now imagine what would happen to this garden if you sprayed the whole thing with a poison. Yes, the few weeds would die, but so would all of your plants. If you did nothing more to your garden, what would grow back? I think you can see where I’m going with this. Every time you take an antibiotic, you’re wiping out your microbiome. Unfortunately, just like the weeds, the bad bacteria and yeast grow back much faster without the good bacteria to keep them at bay. But why do we care about these bugs in the first place?

One of the greatest advances in our understanding of psychiatric disease (and all human disease) is that this gut-brain axis is actually a two-way street. The 10 trillion bacteria that reside in the gut send signals to your intestinal cells called enterocytes. These enterocytes then release hormones, cytokines and other signals into the blood that circulate back to the brain.2 There are other ways the gut communicates with brain, but this gives you an idea of how this seemingly strange connection works. Further, you can see how important the gut is for mental health and overall well-being.

You’ll find extensive information on this site about the gut-brain axis and the types of things that damage our microbiome. However, new research suggests that many pharmaceutical drugs that were once thought to be safe for the microbiome, may actually be causing harm.

Earlier this year, Nature, one of the most prestigious scientific journals in the world, published a groundbreaking study on the interaction between pharmaceutical drugs and the human microbiome.

In a lab, forty bacterial strains commonly found in the gut were tested against 1,079 pharmaceutical drugs to see which drugs inhibited the growth of gut bacteria. Drugs that stopped the growth of at least one bacterial strain were considered a ‘hit’ and likely to have antibiotic-like side effects in humans. The drugs tested were divided up into three groups based on their cellular targets:

1. Antibiotic Drugs (Targets bacteria)
a. As expected, the majority of the antibiotics tested inhibited growth of at least one strain of gut bacteria.
2. Anti-infective Drugs (Targets parasites, protozoa, fungi, and viruses)
a. 53% of these drugs inhibited growth of at least one strain of bacteria. This is somewhat surprising, as these drugs are not designed to attack bacteria, yet more than half did.
3. Human Targeted Drugs (Although this name is confusing, it simply means any drug that is designed to affect a human as opposed to a microbe).
a. 24% of these drugs had antibiotic-like side effects. This included drugs from ALL major classes. Examples include: antipsychotics, calcium channel blockers, antihistamines, proton pump inhibitors, thyroid medications, blood thinners, NSAIDs and anti-diabetics like metformin.

This data is groundbreaking. It suggests that many pharmaceutical drugs, not just antibiotics, are able to modulate the microbiome.

For example, antipsychotic drugs work, theoretically, by acting on dopamine and serotonin receptors in the human brain. These receptors are not found in bacteria. Therefore, they should have no effect on the bacteria in the gut. However, that is not what this study found. As mentioned above, 24% of drugs designed for human cells, also negatively affected gut bacteria. This suggests that every time you take an antipsychotic, an NSAID, metformin, or many others, you are harming your microbiome.

The authors conclude that their study likely underestimates the impact of these drugs on the microbiome due to “the limited selection of bacterial strains screened.”3 As you can see from the study figure below, as they sampled more strains of bacteria, more human-targeted drugs were found to have antibiotic-like activity. This study only tested 40 strains, but there are actually hundreds in the human microbiome. Thus, the percentage of pharmaceutical drugs that impact the gut is likely much higher than 24%. 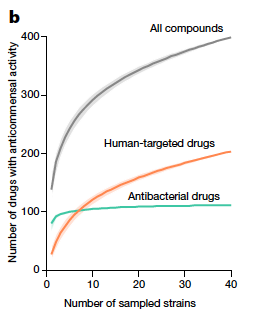 The study also found that the healthy bacteria were more likely to be harmed than the pathogenic strains. Remember the garden? This is like spraying a poison on your garden that preferentially attacks the plants over the weeds.

Other Studies Support These Findings

Although this study was done in a lab, their data correlates well with other human studies. A large Flemish cohort study4 showed that patients taking hormones, antidepressants, immunosuppressants or anti-inflammatory drugs had significant changes in their microbiome. Another study5 showed that patients on long-term metformin showed alterations in their gut bacteria. Similar studies6 7 8 demonstrate the same results for atypical antipsychotics and proton pump inhibitors. The study authors conclude: “we find high concordance between the effects of drugs in vitro (in a lab) and in humans, confirming clinical relevance and direct anticommensal activity for the aforementioned cases.”3

Our understanding of the human microbiome is only in its infancy. Yet, early studies already show clear evidence that many pharmaceutical drugs (if not all of them), are harming the microbiome. The fact that these drugs have been on the market for decades and we are now starting to learn about their effects on the microbiome shows how little we actually know about them.

The promise of pharmaceutical drugs to simply and neatly pull only one thread of the spider web while leaving it intact is being revealed as an illusion. Pharmaceutical drugs that harm our microbiome are also harming us. This new research further demonstrates that chasing health with a pill generates a whack-a-mole phenomenon of displacing imbalance and pathology. This approach only covers symptoms while further undermining the root cause of disease. Like the garden, care must be taken to create a balanced gut where our inner ecology can self-regulate. Doing so is the first step to truly healing your mind, mood and body.