Microbiome and the Modern Environment: A Global Drift Toward Dysbiosis? 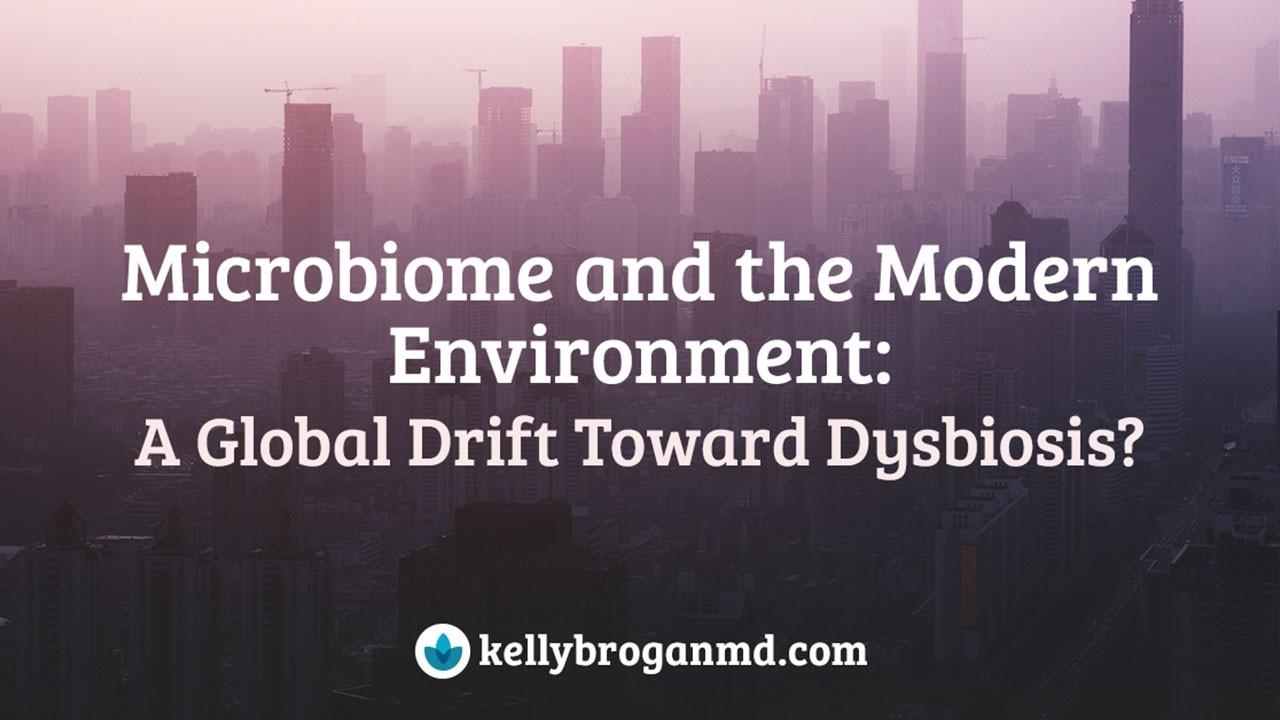 The Journal of Physiological Anthropology has published a series looking at the effects of the modern environment on the microbiome. In this guest blog, authors of research in the series, Alan Logan and Susan Prescott explain more about this connection.

What is physiological anthropology?

Physiological anthropology (PA) is a unique hub for many specialized branches of science and medicine. PA seeks to understand the physiological consequences of modern pressures placed upon humans, most notably those that might differ from our ancestral past.

Fundamentally, these physiological consequences may be part of a broad evolutionary mismatch that contributes to a global epidemic of non-communicable diseases (NCDs).

Just as surely as PA is a science with a rich multi-disciplinary interest, so too is the ‘microbiome revolution’ a great unifying factor in science and medicine. Microbiota (formerly known as ‘microflora’ or ‘flora’) residing on and within humans, as well as their collective genomes, are referred to as the microbiome.

The idea that microbes are part of an immense ecosystem service – one that contributes to human health, and ultimately the well-being of the Earth itself – seems undeniable.

Recently, we and others in this thematic series in Journal of Physiological Anthropology have begun to ask if there is a ‘microbiota of modernity’, and if so, how might modern pressures influence human-associated microbiota?

Although the term dysbiosis has morphed into a term centered largely around alterations in gut (and other anatomically-located) microbes, its original definition is quite simple: life in distress; difficult living.

Given the realities of climate change and biodiversity loss, it is easy to argue that planetary life is in distress. Therefore dysbiosis is a global issue. Furthermore, scientific advances have made it reasonable to ask if modern changes in human behavior and lifestyle (including diminished contact with biodiversity, of which microbes are a part) may also be causing ‘difficult living’ for humans.

Accumulating evidence suggests that urbanization and westernization are factors which contribute to dysbiosis in its more recognizable, microbial-related definition. Here, dysbiosis refers to perturbations to the structure of complex commensal microbial communities.

More specifically, it involves the loss of beneficial microorganisms, and/or the expansion of potentially harmful microbes, and/or the loss of overall microbial diversity. Groups maintaining very traditional non-urbanized and non-westernized lifestyles, are generally differentiated by far greater alpha-diversity of faecal microbiota.

These differences in microbial diversity are not merely of interest for intellectual fancy. Although these more isolated groups – arguably living in ways that more closely resemble our ancestors – may be more susceptible to mortality early in life, they experience NCDs much less frequently throughout life.

Since there are now volumes of research demonstrating that microbial dysbiosis can have a detrimental effects on local and systemic physiology (e.g. lipid and glucose regulation), it seems imperative to learn more about the ways in which microbiota of modernity might be mediators of health and disease.

“It is likely that there are degrees of differences in microbial diversity among truly isolated communities and those that might be in transition.”

Microbial dysbiosis is, of course, a relative term. It is likely that there are degrees of differences in microbial diversity among truly isolated communities and those that might be in transition.

In addition to what we might learn from isolated, non-westernized groups, it is also likely that the most disadvantaged in developed countries, those that shoulder the largest NCD burden, will display a state of dysbiosis.

We refer to this as dysbiotic drift. The environmental forces contributing to such a drift – beyond the obvious dietary factors – are discussed here in the thematic series. Studies in North America and Brazil support the notion that dysbiosis can sit along a socioeconomic gradient in developed and transitioning countries.

PA and the modern microbiota is highly relevant to our collaborative group, the International Inflammation (in-FLAME) Network of the Worldwide Universities Network (WUN); we are interested in the ways in which the physiological consequences of individual and synergistic modern pressures might contribute to non-communicable diseases (NCDs) via immune mechanisms.

Over time, if these pressures are not met with adaptation, intervention, resilience and/or appropriate coping, a destructive tandem of chronic low-grade inflammation and oxidative stress can damage cells – like waves eroding a shoreline. Virtually all NCDs – from allergic diseases to schizophrenia – have been associated with an inflammatory burden.

“There is also a need to understand the role of the microbiota-immune interface as it relates to general health.”

However, PA and groups such as in-FLAME are not focused solely on NCDs. There is also a need to understand the role of the microbiota-immune interface as it relates to general health. As the World Health Organization correctly points out, health is not merely the absence of disease. Mental health is not the absence of a DSM-V or ICD-10 diagnosis – it is quality of life and the ability to reach one’s potential.

The symptoms of subsyndromal/subthreshold mental disorders, chronic fatigue, gastrointestinal complaints and circadian disruptions are exceedingly common in modern environments. They are associated with low-grade inflammation (e.g. elevated inflammatory cytokines) and they also place one on a trajectory toward formal NCD diagnoses.

Therefore, the immune system, which has always collaborated with microbiota in health and disease throughout the evolutionary history of our Genus, has found itself center stage in discussions of microbiota and health. For the previous two decades this was primarily confined to research in allergic diseases and asthma, but no more.

It is entirely possible that insights gained from the study of microbes as an ecosystem service – most especially when the effects of urbanization/westernization are reflected off traditional-living populations – will pay off in untold ways.

Of course we have much to learn and much collaborative work to be completed before any promissory notes are cashed. However, the concentrated microbiome research is already forcing hard questions concerning human behavior, environmental forces pushing dysbiosis (by all of its definitions) and global health.

Dr Prescott is a Professor in the School of Paediatrics and Child Health Research at the University of Western Australia. Dr Prescott is Chair of the International Inflammation Network (in-FLAME) a collaborative network that addresses early life risk factors, pathways and strategies to overcome the rising propensity for chronic inflammatory diseases.

Dr Logan is an independent researcher and, since 2005, has been an invited faculty in the Mind-Body Medicine courses offered in Harvard’s School of Continuing Medical Education.

Since their meeting at an international microbiota conference in Tokyo, Japan, more than a dozen years ago, Drs Prescott and Logan have had a shared interest in the influence of natural environments, microbiota, biodiversity and their collective role in personal, community, and global health.