An Immunologist's Letter to Legislators 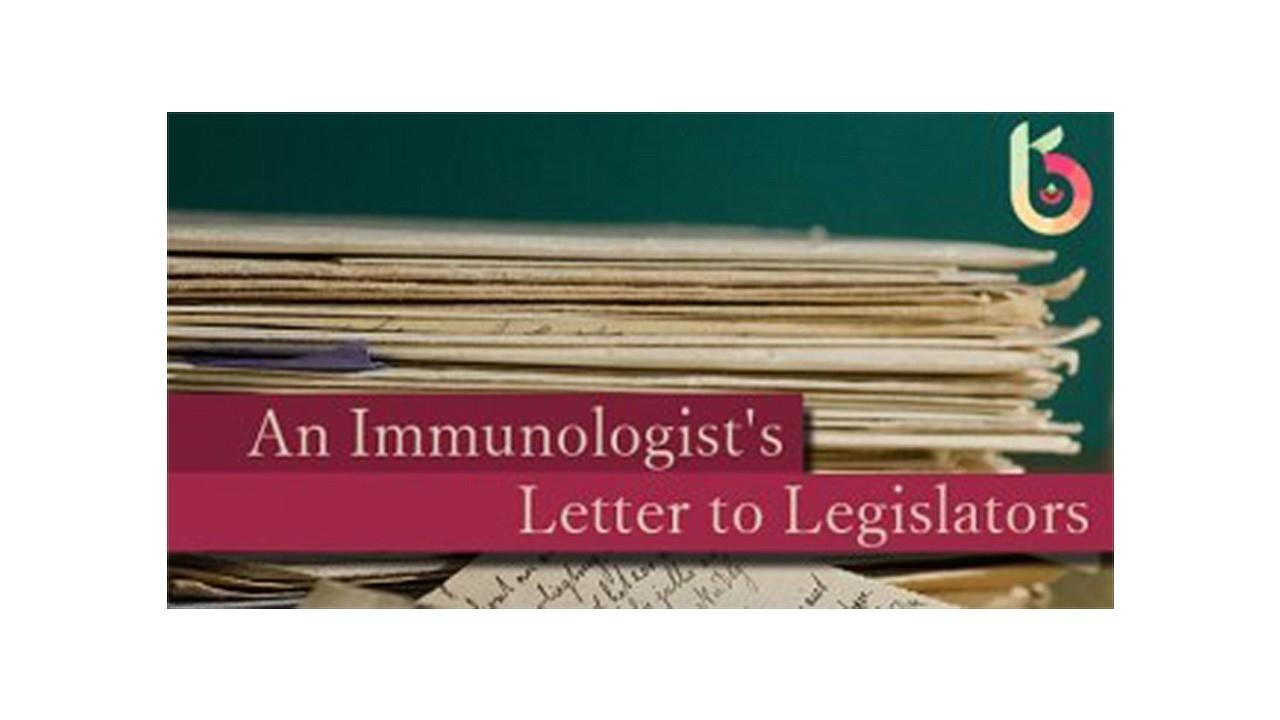 My name is Tetyana Obukhanych. I hold a PhD in Immunology. I am writing this letter in the hope that it will correct a few common misperceptions about vaccines and help you formulate a fair and balanced understanding that is supported by accepted vaccine theory and new scientific findings.

Do unvaccinated children pose a higher threat to the public than the vaccinated?

It is often stated that those who choose not to vaccinate their children for reasons of conscience endanger the rest of the public, and this is the rationale behind most of the legislation to end vaccine exemptions currently being considered by federal and state legislators country-wide. You should be aware that the nature of protection afforded by many modern vaccines – and that includes most of the vaccines recommended by the CDC for children – is not consistent with such a statement. I have outlined below the recommended vaccines that cannot prevent transmission of disease either because they are not designed to prevent the transmission of infection (rather, they are intended to prevent disease symptoms), or because they protect from non-communicable diseases. People who have not received the vaccines mentioned below pose no higher threat to the general public than those who have, implying that discrimination against non-immunized children in a public school setting may not be warranted.

2. Tetanus is not a contagious disease, but rather acquired from deep-puncture wounds contaminated with C. tetani spores. Vaccinating for tetanus (via the DTaP combination vaccine) cannot alter the safety of public spaces; it is intended to render personal protection only.

4. The acellular pertussis (aP) vaccine (the final element of the DTaP combined vaccine), now in use in the USA, replaced the whole cell pertussis vaccine in the late 1990s, which was followed by an unprecedented resurgence of whooping cough. An experiment with deliberate pertussis infection in primates revealed that the aP vaccine is not capable of preventing colonization and transmission of B. pertussis (see appendix for the scientific study, Item #2). The FDA has issued a warning regarding this crucial finding. 1 Furthermore, the 2013 meeting of the Board of Scientific Counselors at the CDC revealed additional alarming data that pertussis variants (PRN-negative strains) currently circulating in the USA acquired a selective advantage to infect those who are up-to-date for their DTaP boosters (see appendix for the CDC document, Item #3), meaning that people who are up-to-date are more likely to be infected, and thus contagious, than people who are not vaccinated.

5. Among numerous types of H. influenzae, the Hib vaccine covers only type b. Despite its sole intention to reduce symptomatic and asymptomatic (disease-less) Hib carriage, the introduction of the Hib vaccine has inadvertently shifted strain dominance towards other types of H. influenzae (types a through f). These types have been causing invasive disease of high severity and increasing incidence in adults in the era of Hib vaccination of children (see appendix for the scientific study, Item #4). The general population is more vulnerable to the invasive disease now than it was prior to the start of the Hib vaccination campaign. Discriminating against children who are not vaccinated for Hib does not make any scientific sense in the era of non-type b H. influenzae disease.

6. Hepatitis B is a blood-borne virus. It does not spread in a community setting, especially among children who are unlikely to engage in high-risk behaviors, such as needle sharing or sex. Vaccinating children for hepatitis B cannot significantly alter the safety of public spaces. Further, school admission is not prohibited for children who are chronic hepatitis B carriers. To prohibit school admission for those who are simply unvaccinated – and do not even carry hepatitis B – would constitute unreasonable and illogical discrimination.

In summary, a person who is not vaccinated with IPV, DTaP, HepB, and Hib vaccines due to reasons of conscience poses no extra danger to the public than a person who is. No discrimination is warranted.

When the risk of an adverse event requiring an ER visit after well-baby vaccinations is demonstrably so high, vaccination must remain a choice for parents, who may understandably be unwilling to assume this immediate risk in order to protect their children from those diseases that are generally considered mild or that their children may never be exposed to.

Can discrimination against families who oppose vaccines for reasons of conscience prevent future disease outbreaks of communicable viral diseases, such as measles?

Measles research scientists have for a long time been aware of the “measles paradox.” I quote from the article by Poland & Jacobson (1994) “Failure to Reach the Goal of Measles Elimination: Apparent Paradox of Measles Infections in Immunized Persons.” Arch Intern Med 154:1815-1820:

“The apparent paradox is that as measles immunization rates rise to high levels in a population, measles becomes a disease of immunized persons.”2

Further research determined that behind the “measles paradox” is a fraction of the population called LOW VACCINE RESPONDERS. Low-responders are those who respond poorly to the first dose of the measles vaccine. These individuals then mount a weak immune response to subsequent RE-vaccination and quickly return to the pool of “susceptibles’’ within 2-5 years, despite being fully vaccinated.3

Re-vaccination cannot correct low-responsiveness: it appears to be an immuno-genetic trait.4 The proportion of low-responders among children was estimated to be 4.7% in the USA. 5

Studies of measles outbreaks in Quebec, Canada, and China attest that outbreaks of measles still happen, even when vaccination compliance is in the highest bracket (95-97% or even 99%, see appendix for scientific studies, Items #6&7). This is because even in high vaccine responders, vaccine-induced antibodies wane over time.

It has been documented that vaccinated persons who develop breakthrough measles are contagious. In fact, two major measles outbreaks in 2011 (in Quebec, Canada, and in New

York, NY) were re-imported by previously vaccinated individuals.6;Taken together, these data make it apparent that elimination of vaccine exemptions, currently only utilized by a small percentage of families anyway, will neither solve the problem of disease resurgence nor prevent re-importation and outbreaks of previously eliminated diseases.

Is discrimination against conscientious vaccine objectors the only practical solution?

The majority of measles cases in recent US outbreaks (including the recent Disneyland outbreak) are adults and very young babies, whereas in the pre-vaccination era, measles occurred mainly between the ages 1 and 15. Natural exposure to measles was followed by lifelong immunity from re-infection, whereas vaccine immunity wanes over time, leaving adults unprotected by their childhood shots. Measles is more dangerous for infants and for adults than for school-aged children.

Despite high chances of exposure in the pre-vaccination era, measles practically never happened in babies much younger than one year of age due to the robust maternal immunity transfer mechanism. The vulnerability of very young babies to measles today is the direct outcome of the prolonged mass vaccination campaign of the past, during which their mothers, themselves vaccinated in their childhood, were not able to experience measles naturally at a safe school age and establish the lifelong immunity that would also be transferred to their babies and protect them from measles for the first year of life.

Luckily, a therapeutic backup exists to mimic now-eroded maternal immunity. Infants as well as other vulnerable or immuno-compromised individuals, are eligible to receive immunoglobulin, a potentially life-saving measure that supplies antibodies directed against the virus to prevent or ameliorate disease upon exposure (see appendix, Item #8).

2) there is a significantly elevated risk of emergency room visits after childhood vaccination appointments attesting that vaccination is not risk-free;

3) outbreaks of measles cannot be entirely prevented even if we had nearly perfect vaccination compliance; and

4) an effective method of preventing measles and other viral diseases in vaccine-ineligible infants and the immuno-compromised, immunoglobulin, is available for those who may be exposed to these diseases.

Taken together, these four facts make it clear that discrimination in a public school setting against children who are not vaccinated for reasons of conscience is completely unwarranted as the vaccination status of conscientious objectors poses no undue risk to the public.

The table below from the Cuban IPV study documents that 91% of children receiving no IPV (control group B) were colonized with live attenuated poliovirus upon deliberate experimental inoculation. Children who were vaccinated with IPV (groups A and C) were similarly colonized at the rate of 94F97%. High counts of live virus were recovered from the stool of children in all groups. These results make it clear that IPV cannot be relied upon for the control of polioviruses.

“Baboons vaccinated with aP were protected from severe pertussis associated symptoms but not from colonization, did not clear the infection faster than naïve [unvaccinated] animals, and readily transmitted B. pertussis to unvaccinated contacts. By comparison, previously infected [naturallyFimmune] animals were not colonized upon secondary infection.”

Moreover,when patients with up to date DTaP vaccinations were compared to unvaccinated patients, the odds of being infected with PRN deficient strains increased, suggesting that PRN bacteria may have a selective advantage in infecting DTaP vaccinated persons.”

The chart below from Rubach et al. shows the number of invasive cases of H. influenzae (all types) in Utah in the decade of childhood vaccination for Hib. 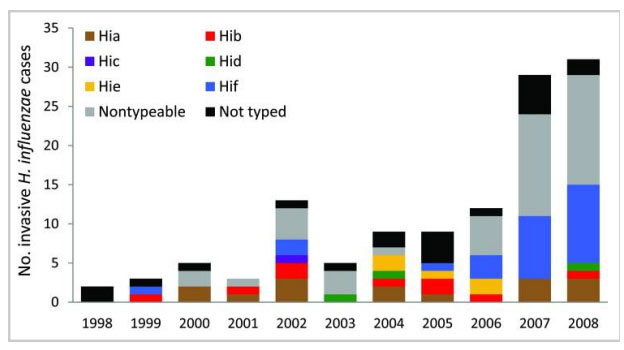 “Four to 12 days post 12 month vaccination, children had a 1.33 (1.29 1.38) increased relative incidence of the combined endpoint compared to the control period, or at least one event during the risk interval for every 168 children vaccinated. Ten to 12 days post 18 month vaccination, the relative incidence was 1.25 (95%, 1.17 1.33) which represented at least one excess event for every 730 children vaccinated. The primary reason for increased events was statistically significant elevations in emergency room visits following all vaccinations.”

“The largest measles epidemic in North America in the last decade occurred in 2011 in Quebec, Canada.”

“A super spreading event triggered by 1 importation resulted in sustained transmission and 678 cases.”

“Among adolescents, 22% [of measles cases] had received 2 vaccine doses.Outbreak investigation showed this proportion to have been an underestimate; active case finding identified 130% more cases among 2 dose recipients.”

“The reported coverage of the measles mumps rubella (MMR) vaccine is greater than 99.0% in Zhejiang province. However, the incidence of measles, mumps, and rubella remains high.”

1. To prevent or attenuate an attack in immunocompromised contacts

2. To prevent or attenuate an attack in pregnant women

3. To prevent or attenuate an attack in infants under the age of 9 months