What is the Placebo Effect? 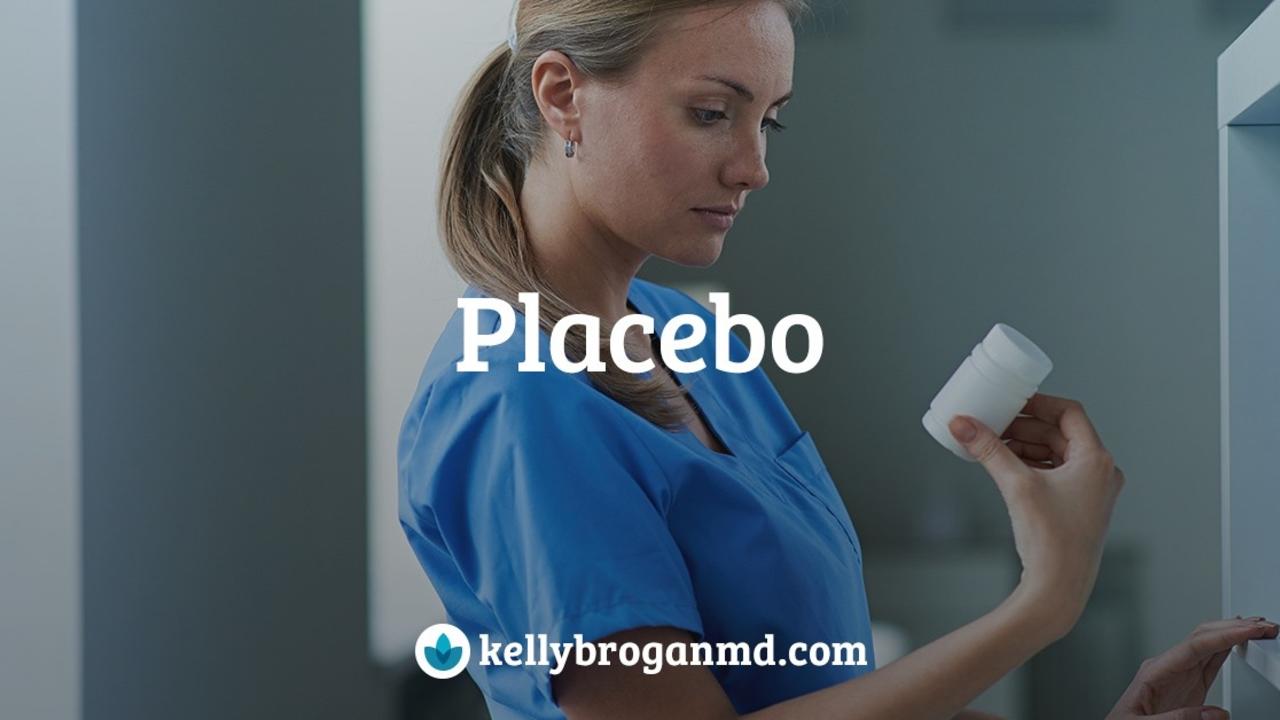 We all love the idea of a magic pill.

I thought that I was prescribing them, for years, to my patients suffering from insomnia, forgetfulness, lack of motivation, tearfulness, fatigue, flat mood, hopelessness, and irritability. I believed that I was helping them, doing something to ease their suffering and get them back on their feet.

Then, just after completing my training, I came across some inconvenient data. Science that I hadn’t been exposed to in my near decade of conventional medical education. Science that was non-industry funded and pretty hard to brush off as insignificant.

So, I’ll lead with the bad news. I learned about the dark side of antidepressants when I read Anatomy of an Epidemic and found out that the long term data suggests that people actually do worse if they are treated than if they never were.

How can that be? I was taught that patients needed to take these meds for life just like a diabetic needs to take insulin? Surely they’re helpful in some ways even though they take 6-8 weeks to work, right?

Well, it depends on how you define helpful.

The short-term chemical effects may be something you like – you may enjoy a bit of stimulating effect from Prozac, some sedation with Paxil at night, or some appetite suppression from Wellbutrin, but just as drinking alcohol for anxiety comes at a cost, so do the chemical “benefits” of these meds.

Here’s what researchers have to say:

“As investigators confront these dismal long-term outcomes, they are focusing on the possibility that the drugs fail over time because they induce compensatory adaptations ‘the opposite of what the medication originally produced.’ This, El-Mallakh wrote, may “cause a worsening of the illness, continue for a period of time after the discontinuation of the medicine, and may not be reversible” (El-Mallakh et al., 2011).

As I took this deep dive into the science, what I began to learn really freaked me out, namely that:

But the benefits outweigh the risks, right?

You might be thinking, maybe it’s worth these risks because we have to do something about serious depression? Well, it turns out that compelling science is now suggesting that if these medications do, in fact, relieve your depression and anxiety, it was most likely because of the placebo effect.

Now, every time I lecture on this subject, someone gets up in the audience pretty angry with me and yells, “I don’t care what you say, Prozac saved my life!” or some similarly and understandably exasperated sentiment.

I’m merely relaying what the science says which is that antidepressants have a special ability to relieve at least some (30-50%) cases of depression simply because people believe they will.

We get these beliefs from our cultural consciousness. From direct-to-consumer advertising (we are one of two countries that allows for it!), from our prescription-friendly doctors, and then from the chatter about it all around.

What is the placebo effect?

A placebo effect doesn’t mean that you were fooled or tricked. It doesn’t mean you’re making it up or that you’re gullible. It means that a complex physiologic cascade of events was kicked off by your experience of taking a pill with the promise of relief.

I often use this example to illustrate the power of belief: let’s say you are walking down a dark alleyway, alone, and hear rapid footsteps coming up behind you, what’s going to happen? An entire fight or flight cascade complete with racing heart, sweating, shortness of breath, and paralyzing fear, unleashes. You see, feel, think danger. If you then hear your friend’s voice from those footsteps, what happens? All of this dissipates and you may even laugh. What has changed? Your perception. You told your body that it is safe. And your body reflected that.

There are many examples of this in the published medical literature. A contemporary example of this was carried out at Harvard Medical School where 12 patients with fractures were randomized to treatment as usual with xray studies over 12 weeks. One group was guided in healing hypnosis and the other wasn’t. The hypnotized group healed 2.5 weeks faster, according to a blinded radiologist, than the non-hypnotized group.

Then there are the patients at UC Davis, undergoing spinal surgery who had 45% less blood loss when they practiced a brief pre-surgical visualization technique. Mind-set matters.

Antidepressants riding the power of belief

There is also a rich body of literature implicating the role of belief in psychiatric symptoms relief that comes from the work of Irving Kirsch. In 1998, Dr. Irving Kirsch, an expert on the placebo effect, published a meta-analysis of 3,000 patients who were treated with antidepressants, psychotherapy, placebo, or no treatment and found that only 25% of the therapeutic response was attributable to the drug’s action.

This was followed up by a 2008 review, which invoked the Freedom of Information Act to obtain access to unpublished studies, finding that, when these were included, antidepressants outperformed placebo in only 20 of 46 trials (less than half!), and that the overall difference between drugs and placebos was 1.7 points on the 52 point Hamilton Scale. This small increment is clinically insignificant, and likely accounted for my medication side effects strategically employed (sedation or activation). When active placebos were used (placebos with similar side effects to the active medication), the Cochrane database found that differences between drugs and placebos disappeared, giving credence to the assertion that inert placebos inflate perceived drug effects.

The finding of tremendous placebo effect was also echoed in two different meta-analysis by Khan et al who found a 10% difference between placebo and antidepressant efficacy.

The latest data on why antidepressants sometimes “work”

In fact, hot off the press is a new and super interesting study that explores the biology of this effect.

In the first study of its kind, researches used brain scans to determine who was most likely to have an exaggerated response to 10 weeks of antidepressant treatment. They determined that those who had more opiate receptor sites open and available were more likely to respond to an “active placebo” (they were told it was a highly effective and fast-acting antidepressant), and also more likely to experience relief with a subsequent antidepressant. Interestingly, this effect was more active in women.

The compliment to this belief in the cure is the fear of medication discontinuation. Before I taper patients off of psychiatric medication, they need to be in a place of optimistic empowerment (which happens naturally when they begin to feel the benefits of dietary change). There is no option to “white knuckle it”, living in fear of the other shoe dropping. It simply doesn’t work. This is best illustrated by this study where patients who felt they were better on Prozac were told that they would be “randomized” to either continue the exact dose that had helped them OR get a sugar pill. It turns out that both groups became depressed. Yes, Mary who took her same 40mg on Tuesday and then Wednesday when the trial began, became depressed days later simply because of the possibility that she could have gotten the sugar pill placebo.

This is powerful stuff. The brilliant Bruce Lipton, who has worked to awaken us to the reality of our beliefs as the most important factor in our health and wellness, and to decentralize the deterministic gene-based model, states:

“The placebo effect should be the subject of major, funded research efforts. If medical researchers could figure out how to leverage the placebo effect, they would hand doctors an efficient, energy-based, side-effect-free tool to treat disease.”

If not antidepressants then what?

So what does this mean for you?

It means that, if you are taking a medication, it is worth still getting to the root cause of why you needed one in the first place, and if you’re considering one, well, there’s a better way.

Here’s where to start your journey beyond simply suppressing symptoms and into the world of healing and reversal:

Whole body psychiatry – No one wants to take Zoloft for a thyroid condition, right? Find out if your symptoms of depression and anxiety (or panic, bipolar, etc) are physiologic in nature including blood sugar imbalances, hormonal imbalance, food intolerances, or nutrient deficiencies.

Look at your meds – Before you consider a psychiatric prescription, you may also want to look at your other prescriptions including birth control, statins, Tylenol, and antibiotics. Symptoms that resolve when the offending agent is stopped and the imbalances caused by these medications are treated naturally.

Change your breakfast – Learning through experience is one of the most powerful ways to shift mindset. Are you eating cereal, bagels, muffins, or other quick fixes for breakfast? Are you feeling like you need a coffee drip flowing through an IV? Are you hangry about an hour and a half after breakfast? Treat yourself to some body-hacking and see how you feel with a different breakfast. Balancing blood sugar can be as simple as increasing natural fats. Here’s my epically popular smoothie recipe to get you started!

Filter your water – I used to love NYC tapwater. Little did I know that between the fluoride, chlorine, pesticides, and trace prescription drugs, I might have been better off chronically dehydrated. Clean up a major source of toxicity. Begin with a simple filter and consider a Berkey or reverse osmosis or glass bottle spring water.

When you can teach yourself that these small interventions can shift how you feel within minutes to hours, you begin to feel into a different story. Are you really born broken needing a chemical fix or do we just need to get out of our own way so that our bodies can heal and our minds can be free…no placebo needed.