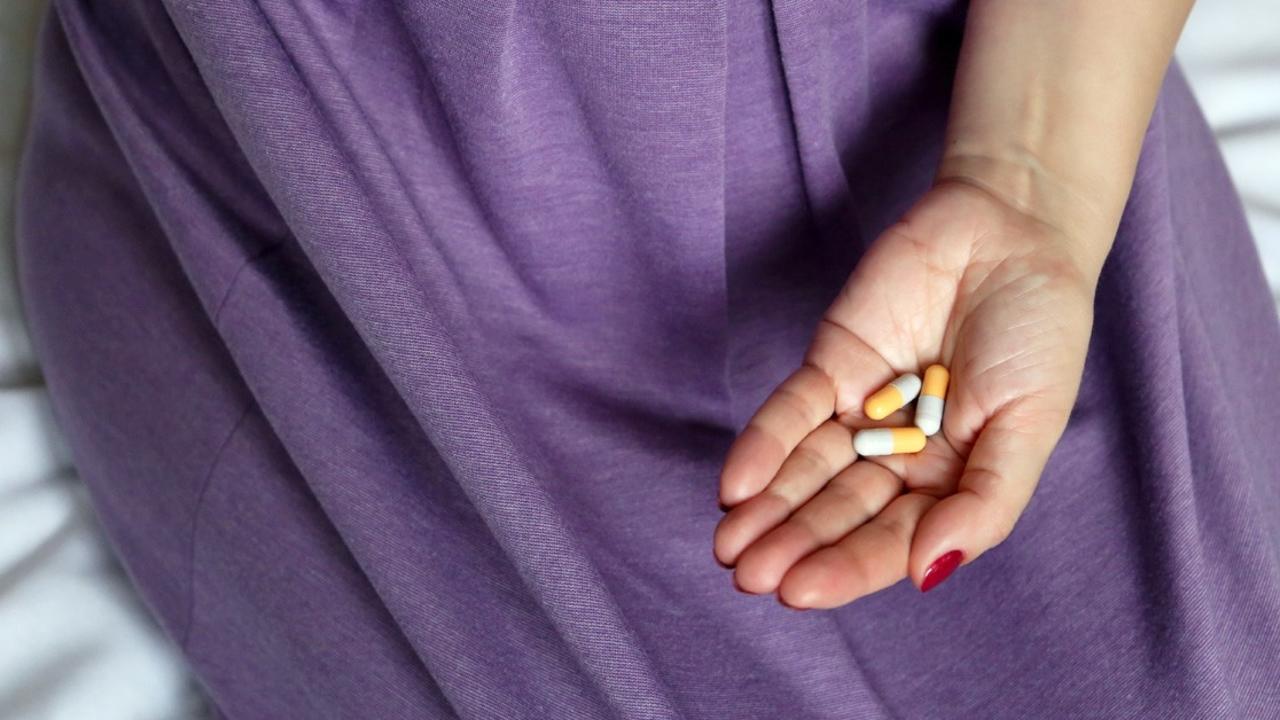 In psychiatrists’ offices, all around the world, women are being presented with something of a Sophie’s Choice – let your mental illness go untreated, or play with the risks (known and unknown) of medication exposure in pregnancy.

One in four women of reproductive age are psychiatrically medicated in this country with approximately 6% to 15% women prescribed antidepressants during pregnancy. Studying the safety of medication exposures around conception, pregnancy, birth, and breastfeeding is a notorious blindspot of allopathic care. Women are not studied in conventional randomized trials for reasons theoretically related to the ethics of exposure of the newborn, leaving actual patients to participate in open label experimentation.

Despite the poor quality of largely registry-reported outcomes, a signal of harm around the use of antidepressants in pregnancy has emerged linking these medications to a number of unintended effects for the unborn child.1 Antidepressant exposure to the drug in utero has been associated with: increased risk for preterm birth, low birth weight, infant convulsions, cardiovascular defects, excessive brain fluid at birth, smaller head size, low Apgar scores, neonatal adaptation syndrome, risk of autism spectrum disorder, and cognitive developmental issues.2 3 4 5 6 7 8 9 10 Even then, most of the research over the past decade has been focused on whether babies are born early, born intact, and can leave the hospital in a timely fashion.

Are we asking the right questions?

Just because babies are born with ten fingers and toes despite a mother’s SSRI prescriptions doesn’t mean that they’re born fully healthy, nor that prescribing is in the best interest of mother or baby.

It may be time to explore the issues surrounding antidepressants with greater levels of nuance in order help women navigate risks, benefits, and alternatives and to look to current research around SSRI-induced epigenetic changes to understand what using these drugs could mean for our future generations.

Researchers from the University of Ottowa, the University of Florida, and the Canadian government’s Environmental Health Science and Research Bureau dug into the transgenerational effects of antidepressants – how one woman’s decision to take medication in pregnancy can affect her grandchildren’s health.

The scientists used zebrafish, whose embryos develop externally to the mother and can be exposed to specific concentrations of the studied chemical. While zebrafish seem like a strange choice for an animal model, these fish share a surprising number of physiological and genetic overlaps with humans. Past studies have also shown that using animal models to investigate developmental questions later yielded similar results in humans.11

Three groups of zebrafish embryos were used in the experiments. One group was exposed to “high” concentrations of fluoxetine (generic Prozac) during embryonic development (54 micrograms per Liter), one was exposed to “low” concentrations (0.54 micrograms per Liter), and the third group was not exposed at all. The researchers then performed a series of stress-related behavioral and physiological tests on those three groups after the embryos matured. They then bred those fish, performing the same tests on three subsequent generations.

First, the scientists found that the cortisol response to an acute stressor, the response to intraperitoneal injections of adrenocorticotropic hormone, and exploratory behavior were reduced by fluoxetine – not only in the first generation but in each of the subsequent generations up until the third generation (which was the last one they tested). This indicated that the functioning of the hypothalamic-pituitary-adrenal axis was severely altered by the medication. Knowing that alterations in hypothalamic-pituitary-adrenal axis often causes observable behavioral changes, the researchers noticed that the high exposure group had significantly less movement and exploratory behavior in response to being placed in a new tank.

At the end of the study, the researchers concluded that their study was an important demonstration that “even a brief ancestral exposure to a common antidepressant modifies the stress response and critical coping behaviors for several generations.”

Speculative of an entire body of research that is just now being explored, this study suggests that the use of SSRIs in pregnancy can go on to affect future generations through epigenetic adaptations.

When we discovered DNA, we started to understand how organisms were designed. DNA was a blueprint, a code that your organelles read to then build proteins. How that code is passed down across generations and how it changes and affects an organism—that is the study of genetics. We used to think that genetics was the answer to illness and health, but since the completion of the Human Genome Project two decades ago, we’ve come to understand how overly-simplified that was.

Epigenetics is a burgeoning field that explains how we can have roughly the same number of protein-coding genes as an earthworm. Epigenetics is the study of heritable changes in organisms caused by the modification of gene expression rather than alteration of the genetic code itself —it includes genes and its modulators, modifiers, and any influence on the expression of genes and even the possibility that nonhuman genes may play an expressive role in human physiology. So even though your genetic code may stay the same, how your ribosomes, RNA, exosomes, and other cellular components, like instructions coded in your “junk DNA,” decide to interpret, express, and pass down that genetic code can vary depending on external factors like environment, lifestyle choices, and, as we’re quickly learning, the use of antidepressants.

What epigenetics and the study like the aforementioned SSRI-affected zebrafish transgenerational study tells us about antidepressants is that SSRIs are not just drugs that might “wear off” after a few hours like we might have assumed. Instead, epigenetics research and these studies show us that the use and aftermath of these drugs are much more serious and potentially permanent. Use of SSRI drugs changes how our body makes and regulates itself. Even more, the drugs can cause lifelong alterations to how an unborn child’s body learns to develop and live, as well as children of at least several generations afterwards—and epigenetics shows us how.

Knowing the side effects of SSRI medications for an adult—which include tardive dysphoria, antidepressant tachyphylaxis, severe withdrawal symptoms—what would antidepressant exposure look like for an unborn child whose body is still learning to interact with their environment?

In a Cerebral Cortex-published study of 84 mothers that was controlled for maternal symptoms and confounding variables, scientists from Helsinki University began to examine the extent of SSRI effect on newborn children whose mothers had taken antidepressants while pregnant. The researchers conducted structured behavioral assessments the babies to find only minor affects associated with the drugs. But, when they looked at neurophysiological testing, however, they discovered that the brains of children exposed to SSRIs in the uterus had lower levels of global integration, interhemispheric connectivity, and local cross frequency integration beyond the immediate withdrawal period common to newborns.12

Combined with the findings of other previous studies, that babies’ brains are seriously changed by SSRI exposure perhaps isn’t surprising. For example, fluoxetine has also been shown to act as a neurotrophic factor in regulating neuronal proliferation, differentiation, migration, and synaptogenesis, and as a key component of programming of the hypothalamic–pituitary–adrenal axis in mammals, the consequences are life-altering.

The Right Questions to be Asking

Beyond whether or not babies can be born or on time, maybe we should be asking whether SSRI exposure during gestation and lactation will affect DNA methylation, exposure to fluoxetine during gestation and lactation affect DNA methylation, a regulatory process that “turns” specific genes on and off, of brain and pain responses of rats.13 (It does.)

Maybe we should be asking how psychotropic drugs interact with mitochondria, the bacteria-derived organelles in the cell that not only direct energy production but also control a cell’s life, reproduction, and death through epigenetic mechanisms. (Studies are showing that it does irreparable damage.)14

Maybe we should be asking whether these medications like lithium, haloperidol, or valproate have even been shown to induce changes of miRNA profiles in the brain, when miRNAs are key regulators of gene expression. (They have.)15 Maybe we should consider whether they permanently change the makeup of mothers’ and babies’ gut microbiomes, a keystone in leaky gut and other depression-causing profiles. 16

While the research over the past decade has been focused on whether babies are born early, born intact, and can leave the hospital in a timely fashion, maybe we should be asking what other effects these drugs have. As we learn just how widely and deeply psychotropic drugs affect our bodies and how our bodies interpret our DNA, how can we keep on thinking that antidepressants are safe for adults, much less unborn children? Perhaps we should be examining our standards for “safety.”

What do we do about it?

Though the medical industry is accustomed to prescribing “safe” drugs to medicate pregnant and lactating women with SSRI drugs, studies are showing just how unsafe it is for the mothers and the unborn children.  The medical field’s current fixation on the chemical imbalance myth blames depression on serotonin imbalance, a reductive and misleading interpretation of depression. Instead of relying on drugs in a futile attempt to “fix” depression, perhaps we should be turning to change lifestyle and diet instead—things that we know that when improperly balanced, can cause depression. Instead of hanging onto outdated ideas about how our bodies are broken and need fixing, it’s time to embrace our co-evolution with the natural world, and utilize diet, meditation, and environmental detoxification as our tool for healing.