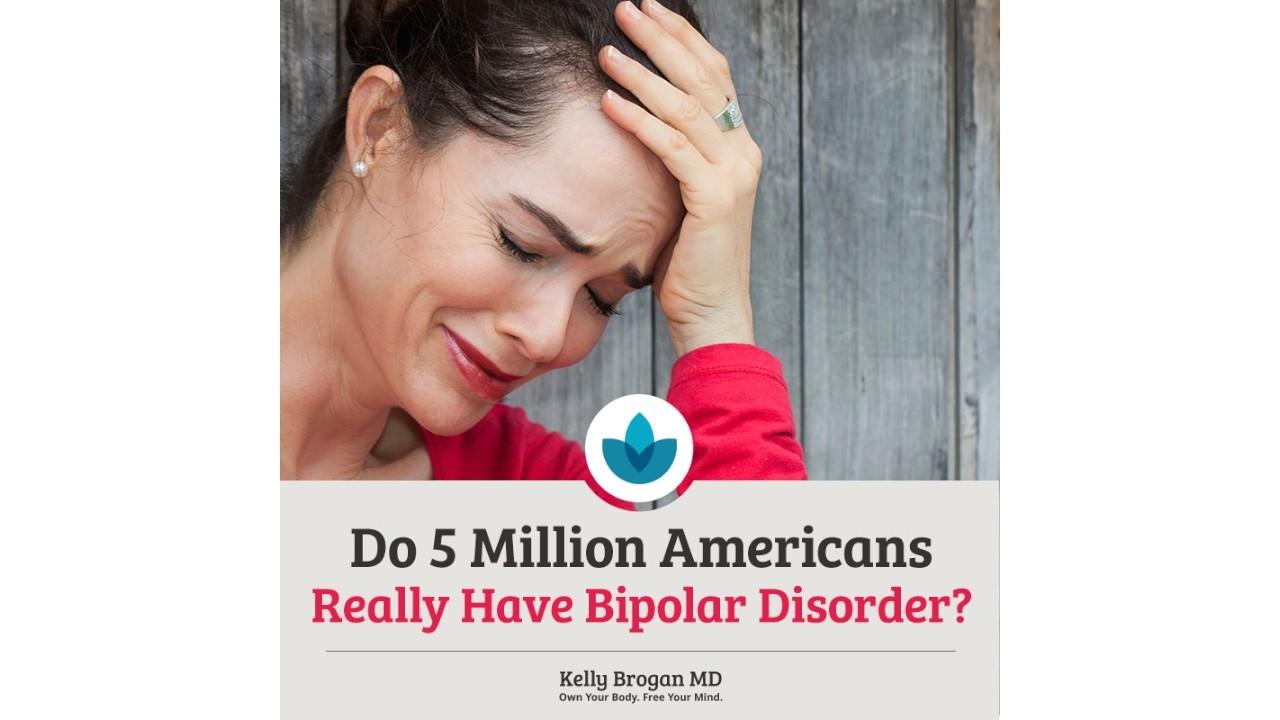 “I have Bipolar disorder”

These patients have been labeled, categorized, and offered an understanding of themselves as diseased, sick, and permanently broken.

Considered one of the more severe mental illnesses, perhaps because it presents almost as an amalgamation of psychosis and depression in particularly volatile form. In my training, I was taught to medicate these patients, often with multiple medications, and often against their will.

Poetically, these patients, desperate to understand who they are in a system that condemns them to a life of struggle and suffering, will be vindicated by modern science.1

The Modern Science of Bipolar Disorder

Modern science honors complexity. It seeks to revel more and more in a picture of dynamic interconnectedness between bodily systems and between bodies and nature. This science is embodied by new fields with long names, like psychoneuroimmunology, and by a burgeoning literature exploring our microbial selves.

Modern science 2 has this to say about Bipolar:

“The very fact that no single gene, pathway, or brain abnormality is likely to ever account for the condition is itself an extremely important first step in better articulating an integrated perspective on both its ontological status and pathogenesis.”

Did you catch that?

The implications of this statement decimate the current myth of an inherited chemical imbalance underlying Bipolar Disorder. No, you weren’t born with a brain chemical problem that you are destined to manage with prescriptions for your entire life. This is a complex syndrome, personal to you, that has to do with how your lifestyle exposures are interacting with your genes – yes your stress, food, sleep (or lack of it), chemical exposures. All of these variables impact how your genes are expressed and are within your control.

So if Bipolar isn’t an inherited chemical imbalance, then what is it?

Just like depression (and ADHD, OCD, Panic Disorder, and even Schizophrenia), what we are calling Bipolar is a fever of the body. It is a symptom that serves as a final common pathway from many different sources.

The incidence of Bipolar disorder appears to be skyrocketing because people are struggling with more and more complex physiologic and pyschospiritual crises and because the guild of psychiatry is generating more patients through medication treatment. I remember that, even over the course of my residency, Bipolar and its “softer” variant Bipolar II, seemed to be ballooning in incidence, now encompassing up to 13% of the population.3 In fact, according to Robert Whitaker’s platform, madinamerica.com:

So we have more diagnosis, but we also have more people actually struggling with what is labeled as Bipolar. What’s driving these struggles?

This root cause perspective leads us to consider at least 3 major contributors that need to be examined for potentially reversible and resolvable triggers.

Inflammation is the body’s purposeful messaging system around perceived distress or threat. It results from myriad sources from psychosocial stress to gut microbial imbalance to toxicant exposure (environmental to pharmaceutical), and in today’s environment, can be persistent and chronic. Research has elucidated several important factors around Bipolar states and inflammatory response, namely that both mania and depression are associated with increased inflammatory markers 4 5, which track linearly with symptoms.6 Immune dysfunction 7 that results from prolonged inflammatory signaling can easily provoke the canary in the coalmine – the thyroid, documented to be altered in the setting of mania.8 In fact, those with a Bipolar diagnosis can be 2.5 times more likely to have elevated thyroid hormone levels.9 In this way, bodily disharmony from gut to immune to hormones can express, in some people as severe depression alternating with periods of extreme behavioral impulsivity.

Rather than parsing them into benefits and side effects, in my opinion, the chemical effects of pharmaceuticals should all be referred to as simply, effects. These effects are not unlike the effects of drugs like cocaine and alcohol – some are desirable or temporarily adaptive, and some are problematic. Many patients begin their Bipolar journey through the gateway drug of an antidepressant. In fact, treatment of depression and anxiety with an antidepressant results in an almost 3 fold increase in diagnosis with Bipolar Disorder,10 interpreted by another study as 20-40% of all those diagnosed with depression, ultimately receiving a diagnosis of Bipolar Disorder.11 Over time, antidepressants can also perpetuate chronic instability (dubbed “rapid cycling”) and poor functional outcomes 12, which can persist even after the antidepressant is withdrawn. 13

Perhaps, as Anatomy of an Epidemic argues (and references!), we have pharmaceuticals to thank for the nature of Bipolar disability today:

Perhaps doing something, in the form of medication, is actually worse than doing nothing.

The use of plants such as cannabis and psychedelics may also open up an experience of perceptual expansion that a given individual, their community, and our culture cannot withstand, condone, or support. Evidence is mounting that first episode psychosis can be kicked off by these substance encounters. 14

The French have even recently coined the term antibiomania to refer to frank mania with psychosis induced by antiviral and antibiotic medication, reversible with cessation of the offending medication. Could pills be inducing what we are calling an inherited chemical imbalance?

Psychiatry has a long history of relishing a Cartesian separation between mind and body. Desperate to “medicalize” this field of conjecture and subjectivity, the guild of psychiatry has attached to a biochemical model of pathology while relegating the secondary considerations of “psychology” to supportive therapy.

Is there another layer of root-cause to consider when it comes to mania and depression? If it isn’t an inflammatory process kicked off by environmental mismatch, and it’s not a fire lit by the match of a substance, then could it be a psychospiritual process?

Considering the cultural subjectivity around pathologizing heightened states of energy, it seems that there may be a role for the chemical straight jacket in preserving American ideals around an aspiritual existence.

Psychiatry pathologizes states of mindfulness, as dissociative, and is quick to label many who would otherwise be regarded as having awakenings, as psychotic. Recent literature even speaks to the difficulty a psychiatrist might have in distinguishing spirituality from psychosis:

“Many aspects of spiritual experience are similar in form and content to symptoms of psychosis. Both spiritually advanced people and patients suffering from psychopathology experience alterations in their sense of ‘self.’ Psychotic experiences originate from derangement of the personality, whereas spiritual experiences involve systematic thinning out of the selfish ego, allowing individual consciousness to merge into universal consciousness. Documented instances and case studies suggest possible confusion between the spiritually advanced and schizophrenia patients. Clinical practice contains no clear guidelines on how to distinguish them.”

In the world of Psychiatry, distress is a sign of sickness to be eliminated by consciousness-suppressing drugs. It is not a gateway to change. It is not an invitation to look at what might be misaligned or out of balance.

Edward Whitney, MD documents 15 his personal account of mania, and his interface with the very system that credentialed him. He states:

“Mania, in my experience of it, is a process of giving birth to hope in the soul. It is opposed from within by an equally intense nihilism and fear that the entire creation is nothing more than a cesspool of doom. Inner conflict can make a person labile. The cosmic grandiosity comes from trying to answer the question “Is the universe a friendly place or a hostile place?” This is ultimately a religious question, hence the preoccupation with spiritual and religious issues.”

He describes truly recovering only when he left the conventional system and sought support from communities who view spiritual emergencies as a right of passage. He laments, “Medical education does not prepare psychiatrists to deal with spirituality in human experience.”

In fact, patients are leading the way, forming grassroots support networks including one run by Sean Blackwell called Bipolar or Waking Up. He states:

“I´ve received a steady stream of stories from people around the world who feel that they are healing from their bipolar disorder, returning to their lives feeling reborn, as I did a decade ago. As you will see, the secret to healing is the acceptance of the sacred, spiritual aspects of these experiences, and the ability to surrender to this mysterious process.”

To approach this experience from the inside, and from the outside, with curiosity rather than fear, would require a shift in the American psyche. This shift would entail working in support of human processes rather than seeking to control them.16

Beyond Symptom Suppression: Integration and Healing

“Unfortunately, our current diagnostic schema for bipolar disorder, which is based on descriptive nomenclature rather than clearly delineated causal mechanisms, has not given rise to treatments that provide sustained, symptomatic, and functional recovery for many patients. Moreover, available pharmacologic interventions are plagued by pronounced adverse effects that often aggravate metabolic status and further compromise cognition in people already struggling in this domain.”17

This statement from the medical literature seeks to communicate this truth: Bipolar Disorder is not diagnosed based on science and the medication treatments cause serious side effects and ongoing struggle.

In this new model, symptoms are purposeful. They beg attention. They offer an invitation to evolve, revisit, and explore neglected and unexamined elements of the human experience from nutrition to stress to beliefs.

It is my perspective that even psychospiritual crisis is an invitation to honor one’s body ecology.

Beginning with the program outlined in A Mind of Your Own is a great first step when there is a readiness and willingness to engage in the process of healing, proactively.

Let’s look at some important steps toward identifying a root cause:

It’s time to take a long hard look at a story that we have been telling patients about their mental health. We have to look through a broader lens – one that encompasses the totality of the person and how they may have strayed from their optimal lifestyle. Symptoms are an invitation to pave the road towards one’s fullest expression in this lifetime.

Learn more in A Mind of Your Own.